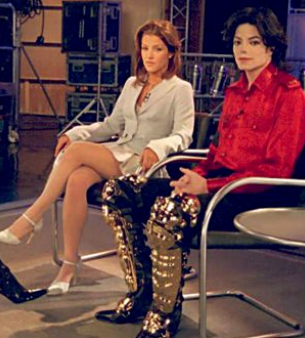 Evan’s home life became increasingly strained. According to court records he and his second wife Nathalie separated on September 6, 1994. Among other things, Nathalie was to receive the family home, which had been placed solely in her name in 1992. Evan was to receive the proceeds from an agreement between himself and his former dental partner, Dr. Mells, dated April 1, 1994 dealing with the sale of his dental practice. Evan would also maintain sole ownership of his literary works, a couple of which were scripts entitled “Six Inches From Heaven” and “The Sleazoids vs. The Schulmbergers.” Three months later the couple signed dissolution of marriage agreement citing irreconcilable differences. Evan granted Nathalie, Jordan’s stepmother, reasonable visitation with Jordan, and the agreement outlined who would pay for his private schooling at Crossroads and his everyday expenses. At first glance one would wonder why these things would be included in the agreement if Jordan was living with his father. But, according to the records, Jordan had chosen to live with his stepmother and half-siblings, Emmanuelle and Nicholas, without his father for thirty-two months. So it was agreed that Evan would pay all of Jordan’s expenses while living in Nathalie’s home. At first their divorce seemed amicable, but that would not last for long. 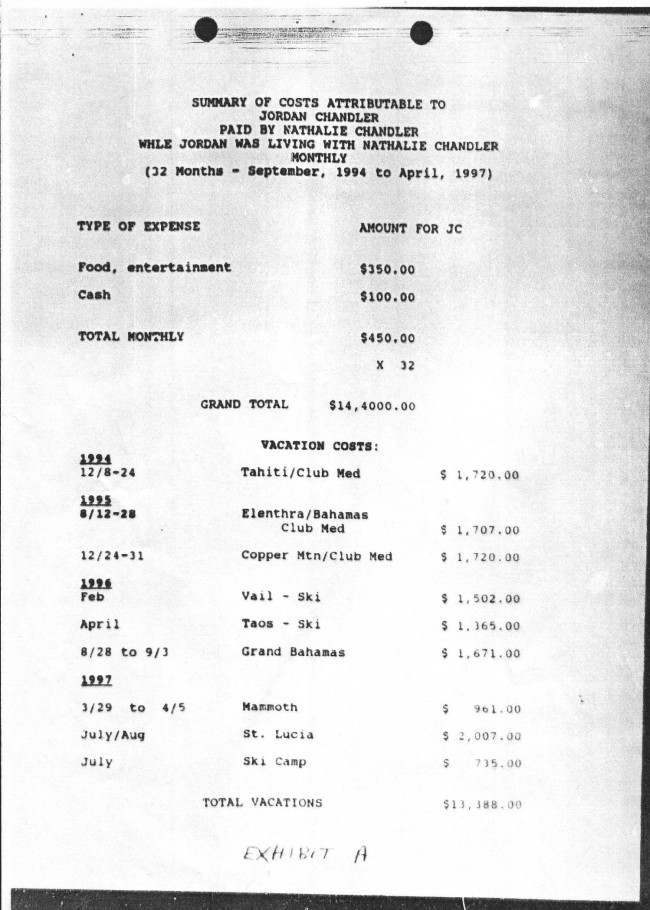 Evan and Nathalie’s divorce judgment was finalized in early 1995, but because of the “pending or threatening litigation” involving Evan’s participation in the Chandler vs. Jackson case, Nathalie received $550, 0000 from the settlement agreement and Evan was not required to pay child support at that time. The matter of child support would be held in abeyance — no child support would be ordered until needed. It was also widely reported in 1995 that Jordan Chandler had emancipated himself from his parents while living with his stepmother. But things would soon take a turn for the worst. According to Nathalie she had loaned Evan money in the past and had been repaid. So when Evan asked to borrow money again she loaned him “$441,500 in order to carry on various legal cases as a result of the Chandler v. Jackson matter.” Evan made the promise that if Nathalie needed funds prior to finalization of Evan’s legal matters, he would repay her immediately even if he had to borrow the money from Jordan — to which Jordan agreed.

On May 7, 1996 while Jackson was still fighting the Gutierrez and Neverland 5 suits,Evan Chandler filed a civil lawsuit against Michael Jackson, Lisa Marie Presley, Walt Disney Company, “ABC” Capital Cities Broadcasting, Diane Sawyer, Neverland Zoo Foundation and others. His suit was for slander, intentional emotional stress, negligence, conspiracy, unjust enrichment and breaching the confidentiality agreement from the 1994 settlement. Chandler claimed that the confidentiality agreement had been breached when Jackson maintained his innocence in the interview he and Lisa Marie gave Diane Sawyer on June 14, 1995. The lawsuit also claimed that in the lyrics of his 1995 album HIStory Jackson made “derogatory, harmful, malicious and fraudulent public statements” about the Chandlers, even though in none of the album’s lyrics are the Chandlers named (though there are songs criticizing greed the media’s conduct, and there is one song that criticizes District Attorney Tom Sneddon). Evan Chandler this time demanded $60 million from Jackson, attorney’s fees, a jury trial and a record deal so that he can release an album about the alleged sexual molestation of his son, titled EVANstory. According to the lawsuit, “This album will include such songs as: ‘D.A. Reprised,’ ‘You Have No Defense (For My Love),’ ‘Duck Butter Blues,’ ‘Truth,’ and other songs.”

Lisa Marie Presley was being sued by Chandler based on her alleged interference in the confidentiality agreement. However, Presley was not a party to the agreement nor did she have a copy of the agreement. Her attorneys filed a protective order and stated that if a deposition is ordered they request it be made at her current address in Florida rather than in California. (Numerous documents as well as tabloid articles are filed to call into question the legitimacy of her residence and even her marriage to Jackson.)

Based on speculative and unfounded “conspiracy” allegations, plaintiff Evan Chandler has improperly dragged defendant Lisa Marie Presley into this lawsuit that is really between Chandler and Presley’s former husband, defendant Michael Jackson alone. Chandler’s recent actions prove that his reason for improperly suing Presley is, pure and simple, publicity, for himself and his counsel. Two weeks ago, Chandler took Presley’s deposition, and secretly called the media to tell them when and where Ms. Presley would be deposed. When they arrived at the deposition, Ms. Presley and her council were unexpectedly besieged by the press. Chandler’s counsel also went on the air in a nationwide tabloid news program to publicize the Presley deposition. It would not be surprising if counsel had been paid for that. The deposition included questions about such private issues as Ms. Presley’s marriage to Jackson. Yet when asked to make the transcripts confidential, Chandler’s counsel refused, showing that Chandler intends – unless stopped by this court — to further improperly publicize Ms. Presley’s private life. 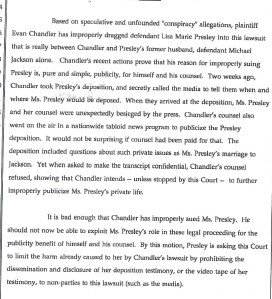 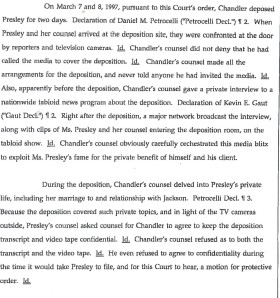 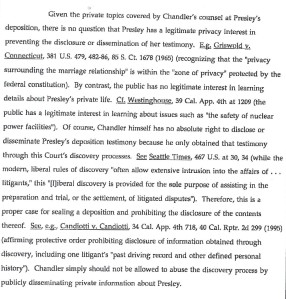 Evan Chandler often complained about the media coverage, stating that it caused his loss of employment (couldn’t return to his practice but he neglected to state that he sold it 2 years prior) and harassment by Jackson fans. But he was more than willing to contact the media for his own financial motives. Apparently, he only disliked the press when they had something negative to say about him. Chandler was trying to push for a public jury trial in a blatant attempt to humiliate Michael into settling the case. At approximately the same time the media was requesting coverage. Evan mysteriously regained custody of his son Jordan who had been living with his stepmother for nearly two years.

Over Evan Chandler’s objections the court ordered binding arbitration pursuant to the parties’ 1994 settlement agreement. The parties selected a three judge arbitration panel. However, in an apparent attempt to avoid the court’s ruling on arbitration Evan’s counsel filed another suit against Jackson on behalf of Jordan Chandler in a different county (Los Angeles County). Evan and Jordan’s suits were almost identical, except Jordan’s complaint included fewer causes of action. This prompted media speculation that Jordan would testify. Michael’s attorneys asked the courts to consolidate arbitrations.

The three arbitrators of the settlement document (retired Los Angeles Superior Court Judge Bonnie Martin, retired state Supreme Court Justice Edward Panelli, and retired Fourth District Court of Appeal Justice John K. Trotter) determined that there was not a breach of the settlement agreement “because the complained-of activities involved Jackson’s own public image, his music and his new album, not the plaintiffs.” They also said that Jackson could not be deemed by the settlement agreement to be barred from proclaiming his innocence in a public forum such as a TV interview: “In the present case, the arbitrators’ finding of no wrongful conduct based on their interpretation of the agreement did not conflict with any explicit and mandatory term of the agreement.”

Michael’s attorney, Steve Cochran, filed a declaration in Jackson’s still unresolved suit against Gutierrez referencing Evan Chandler’s 1996 case against Jackson stating, “The [1996 Chandler] case basically alleges breach of contract. Portions of that action had been ordered to arbitration under the JAMS/Endispute Comprehensive Arbitration Rules and Procedures. Jackson has filed a cross-complaint in that action that alleges that Chandler and his son breached the same contract by divulging certain information to Victor Gutierrez.” There are certainly signs in Gutierrez’s book that lead one to believe he was in contact with the Chandlers. But Gutierrez had a different agenda than the Chandler’s. His story is not that of a victim. His story is a “love story” that was ruined by the “evil prejudice” of society and the greed of the parents. Gutierrez used the Chandlers and then went with his own agenda.

“The problem came in that lawsuit with the Chandlers when they cooperated with Gutierrez. That’s how Michael was able to sue because they had a nondisclosure and once Evan Chandler started cooperating with Victor Gutierrez that put him in violation of the nondisclosure.” said Ken Wells.  “Because the father was still trying to get money. He wasn’t getting much money from the son or something. He was trying to get money…I can’t remember the timeline on that.”

At this point it must have been apparent to Chandler that his suit against Jackson wasn’t going well.  Jackson filed a counter suit against him, he had been ordered to pay attorney’s fees and court costs to ABC/Sawyer as well as Lisa Marie Presley. According to a declaration made by Evan’s ex wife, Nathalie Chandler, Evan had been living in Santa Barbara, not working, and had moved abruptly leaving no forwarding address.

In August 1998 Nathalie Chandler filed for modification of child support. She stated that “over three years later, respondent still has not offered to pay child support although he has been asked to contribute to the welfare of the minor children.” Since separating Nathalie had lent Evan approximately $441,500 for legal cases, paid a $21,952.57 IRS tax bill on his dental practice, and spent $27,788 on Jordan’s expenses while he lived with her from September 1994 to April 1997. Chandler failed to repay Nathalie and claimed he could not work, or as she stated in court documents he was “unwillingness to work” and had “chosen to live off of his older son Jordan.” She went on to call him a “slacker” who had not seen or spoken to his two minor children since July 1997, despite her and the children’s repeated pleas:

Jordan, who is now eighteen years of age, has come into a great deal of money and, apparently, is willing to support his father but chooses to ignore his siblings along with petitioner in spite of the fact that Jordan chose to live with petitioner and Emmanuelle and Nicholas without his father for thirty-two months after petitioner and respondent separated. Evan is unwilling to work and chooses live in the lap of luxury while ignoring his two minor children. The children keep asking why their father and brother Jordan do not love them anymore and refuse to see them or talk to them when they call. As a result of Evan’s cruel and deliberate abandonment of his two minor children, both children have been in therapy since September 1997, Nicholas openly stating that he didn’t want anything to do with his father and did not trust him.

Nathalie made numerous attempts to contact Evan. His brother Ray told her that Evan and Jordan had moved and were traveling in Europe for an indefinite period of time. Ray’s daughter, Fanny Windsong, who had been close to Jordan, had no knowledge of their whereabouts. Evan’s elderly mother, Beatrice Heitner, told Nathalie that she hadn’t spoken to Evan or Jordan since January 1998, following an argument she had with her son regarding his refusal to visit or support his two minor children. Nathalie stated that despite attempts to reestablish communication she had no idea where he was living. “Evan is not a person who has a lot of friends. Since he decided to live with and off his son Jordan, he has become either a nomad or a recluse. He does nothing to provide for his own living, or that of his minor children. He apparently is satisfied to allow his 18-year-old son to support him and purposefully cut himself off from any other family members who disagree with his behavior,” Nathalie stated.

Nathalie searched for her ex-husband but was unable to locate him. He was not working and there were no utilities placed in his name. He was essentially hiding. Chandler not only owed her a substantial amount of money, he owed ABC/Sawyer, Presley and Jackson as well. They all had won arbitration awards that Chandler could not or would not pay. According to deed records that Jordan filed when purchasing a home in New York in 1999, he had been living at his uncle’s home in Great Neck, New York since 1997.